Rare Autoimmune Skin Condition after COVID-19 vaccination in the elderly

A 78-year-old man went to the Emergency Department at King Fahad Medical City in Riyadh, Saudi Arabia, with numerous bullae throughout his extremities one day after receiving the second dose of Pfizer Covid-19 vaccine. The bullae were preceded by intense pruritus and urticated plaques. A skin biopsy was performed which revealed IgG (+1), IgM (+1), and C3 (+1) staining of the basement membrane. The patient was treated with topical and systemic corticosteroids, fusidic acid 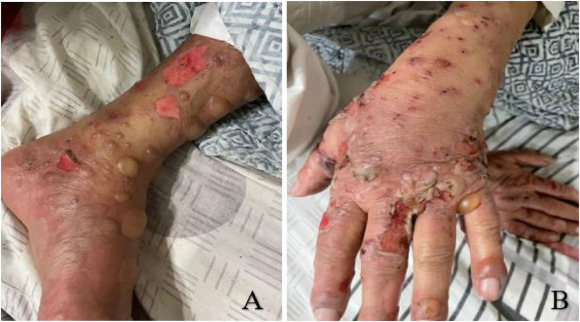 cream, and emollients after a confirmed diagnosis of bullous pemphigoid (BP) was obtained. He was hospitalized for 3 weeks as a case of severe sepsis due to a skin infection, and he was started initially on empiric antibiotics with piperacillin-tazobactam plus vancomycin that was later upgraded to meropenem and vancomycin based on the results of the blood and wound cultures. The patient suffered a pulmonary embolism on the second day of hospitalization and was placed on a heparin infusion that could potentially contribute to his death one month after discharge from the hospital.

A 84‐year‐old male with BP in remission since 4 years after oral prednisone and azathioprine treatment was administered the first dose of the Moderna mRNA‐1273 vaccine. After 2 weeks, he started showing mild blistering lesions on the trunk, which were deemed not to require systemic immunosuppressive treatment. 28 days later, the patient was given the second dose; a worsening of the lesions which became more widespread, involving also the oral cavity.

week after the first dose of Comirnaty (Pfizer–BioNTech COVID‐19 vaccine). Blisters were few and located only on his legs and they were initially misdiagnosed as post‐traumatic lesions by his general practitioner. Three days after the second dose of vaccine, which was administrated 1

month after the first, the patient started developing new blisters on his limbs and trunk. When he was eventually admitted to a hospital he presented several erosions and tense bullae on erythematous base measuring 4–11

cm in diameter on trunk and limbs. A complete resolution of the blisters was obtained after 3

weeks of treatment with topical steroids and prednisone.

A 82‐year‐old female with BP in remission since 3 years after oral prednisone and mycophenolate mofetil treatment was given the first dose of the Pfizer mRNABNT162b2 vaccine. 3 days later, the patient experienced a moderate BP flare in the form of small blisters on the arms and legs. Oral prednisone was prescribed, and the second dose was administered 21 days later. No further BP flares and no injection site reactions occurred.

A 80‐year‐old male with a history of pemphigus vulgaris remitted before 1 year after oral prednisone and mycophenolate mofetil treatment experienced a flare 3 days after the first dose of the mRNABNT162b2 vaccine. After 21 days, the patient was able to complete the second dose of Pfizer mRNABNT162b2 vaccination. No further BP flares and no injection site reactions occurred.

There were also case reports about BP after vaccination in a 66-year old obese male, a 67-year-old man with history of diabetes mellitus and benign prostate hyperplasia and a 68-year-old, otherwise healthy, man. An Italian study described twenty-one cases of SARS-CoV2 vaccine-associated BP, including 9 females and 12 males (M/F = 1.3) with a median age at diagnosis of 82 (IQR: 74–85.5) years. Seventeen patients received the COMIRNATY Pfizer-BioNTech vaccine, two the Moderna mRNA-1273 vaccine, one the ChAdOx1/nCoV-19-AstraZeneca/ Vaxzevria vaccine and one received the first dose with the ChAdOx1/nCoV-19-AstraZeneca/Vaxzevria vaccine and the second dose with the COMIRNATY Pfizer-BioNTech vaccine. Median latency time between the first dose of SARS-CoV2 vaccine and the onset of cutaneous manifestations was 27 (IQR: 7–34) days.

Damiani, G., Pacifico, A., Pelloni, F. and Iorizzo, M., 2021. The first dose of COVID‐19 vaccine may trigger pemphigus and bullous pemphigoid flares: is the second dose therefore contraindicated?. Journal of the European Academy of Dermatology and Venereology, 35(10), p.e645. 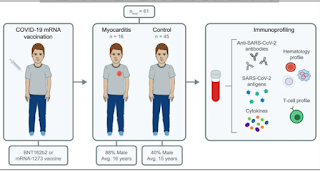