Showing posts from July, 2022
Show all

Allergic reaction and myocardial infarction in a 91-year-old female

For 60 years, a dozen of high-income countries provides some form of compensation for injuries and deaths following vaccination.  The injury support programs worldwide are starting to pay the victims of COVID-19 vaccines.  A 91-year-old Japanese woman died  from an acute allergic reaction and acute myocardial infarction after getting vaccinated. She h ad underlying conditions, including a cerebral ischemic attack and hypertension, which could have been related to her death.  An expert subcommittee of the health ministry assessing the health damage caused by COVID-19 vaccinations approved the payment for her family on July 25, 2022. Nine cases have been screened for eligibility for lump-sum death benefits after receiving a COVID-19 shot. Eight cases have been put on hold, and this is the first time the relief system was applied to a post-COVID-19 vaccination death. REFERENCES Payout for post-vaccination death approved for 1st time | The Asahi Shimbun: Breaking News, Japan News and Analy
Post a Comment
Read more 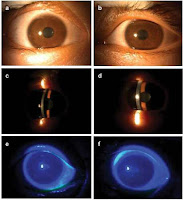 SARS‑CoV‑2 virus  provokes an insult to every singleretinal structure , including retinal pigment epithelium (RPE) and photoreceptors, leading to a progressive impairment.  Multiple cases of ocular inflammation after COVID-19 vaccines have been also reported.  A 19-year-old male was diagnosed with Keratitis 2 days after 2nd dose of inactivated COVID-19 vaccine.   He was treated with topical application of ganciclovir ophthalmic gel and ciclosporin and intravenous injection of ganciclovir. Another 19-year-old male   without a history of eye disease experienced blurry vision three weeks after the second dose of inactivated COVID-19 vaccine (CoronaVac, Sinovac Life Sciences, Beijing, China). He was diagnosed with viral keratitis and received ganciclovir ophthalmic gel and levofloxacin eye drops without relief of the ocular symptoms. After admission and  examination in another hospital, the patient was found to have poor eyesight (best-corrected visual acuity of 20/60 in the right eye and
Post a Comment
Read more

A 59-year-old mother was diagnosed with ovarian cancer during the first pandemic winter. Despite multiple treatments it spread to her brain in January 2022. The cancer weakened her, but it wasn't what killed her. Despite precautions and avoiding social situations that might result in a coronavirus exposure, she got COVID-19 in late May 2022. In her final days, she was struggling to breath and even lost the ability to speak. She died in early June. She was vaccinated and boosted.  REFERENCE https://www.latimes.com/ science/newsletter/2022-09-20/ coronavirus-today-who-is- dying-of-covid-19-now- coronavirus-today
Post a Comment
Read more

Rock musician, 48, died on May 19 2021 days after receiving the AstraZeneca jab.  An inquest held at  Newcastle Coroner's Court  heard how the 48-year-old fell ill with a migraine on May 13, before his condition severely deteriorated in the following days. The individual had suffered from an "excruciating" headache and called for an ambulance on May 15th.  The paramedic who arrived on scene gave evidence at the inquest and said that the patient was “alert and sat up”. His temperature and blood pressure where in the “normal range”. She then advised the patient to go to hospital for further checks, but he said he did not want to go for fear of catching COVID.  A couple of days later, on May 17, another paramedic was called to the patient's home, where he appeared “confused and vacant”. He already had a small seizure and was immediately taken to a hospital. T he neurosurgeon who operated on the patient, said when he arrived, both of his pupils were unresponsive to light.
Post a Comment
Read more

Measuring antibodies which bind viruses to tag them for destruction and antibodies which stop viruses from infecting cells by neutralizing them are associated with vaccine effectiveness. A new study indicates that c ellular response (T-cell proliferation and whole blood Interferon-Gamma Release assays)  might provide a better measure. The study tested  7 vaccinated and 7 non-vaccinated ICU patients during original Omicron wave and compared them to  8 healthy vaccinated volunteers.   Upon ICU admission, vaccinated patients presented high anti-Spike IgG titers that were significantly higher than non-vaccinated patients (Figure A ). In contrast, T-cell proliferation in response to spike antigen was absent (Figure  B). In accordance, in response to SARS-CoV-2 antigens whole blood Interferon-Gamma Release Assay (IGRA) was found to be very low in vaccinated patients whereas they presented with strong response to mitogen (PHA) which illustrated appropriate functionality of T cell (Fig.  C, D
Post a Comment
Read more

A fully vaccinated and boosted 72-year old woman  spent 30 hours in  emergency room  due to a lack of beds on COVID wards. She was then inappropriately transferred to a ward. Her condition deteriorated en route and she died upon arrival. The hospital denied claims by its own staff that she may have been killed by a loose connection on a portable oxygen machine. All Covid-19 patients ill enough to need oxygen were eligible to receive Tocilizumab – an immunosuppressant known to reduce COVID mortality. The patient was waiting for this drug for two years for her arthritis. She couldn’t get it because there was a shortage, since supplies were being diverted for COVID patients. When she became a COVID-19 patient, she had to wait for approval for 15 more hours.  She died about 19 hours after she became eligible for the drug that she never received. REFERENCES https://www.thecomet.net/news/health/letchworth-sarah-choudhurys-mum-failed-by-queens-hospital-9215100 https://www.romfordrecorder.co.u
Post a Comment
Read more 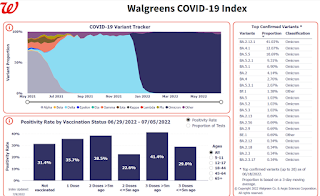 The more vaccinated you are (unless you got your last dose recently), the higher the chance you test positive?  Walgreen COVID-19 index is a surveillance system gathering COVID-19 diagnostic data from tests administered at 6,950 pharmacies across the United States and Puerto Rico. Diagnostic tests include drive-through Rapid Nucleic Acid Amplification tests (Rapid) and Polymerase Chain Reaction (PCR) tests; currently however, the Index only displays results from PCR tests. During the pre-Omicron era, the data demonstrated higher positivity rates among the unvaccinated group. However, in early 2022 the data indicated a lower positivity rate among unvaccinated individuals compared to those who have received at least 1 dose of vaccine. The vaccine effectiveness is in negative according to hospitalization and death data too. The figure above shows results as of July 5, 2022.  Walgreens data could be influenced by testing behavior though.  REFERENCE National Surveillance of COVID-19 Infec
Post a Comment
Read more
More posts