Showing posts from October, 2022
Show all

Thousands of case reports of myocarditis after COVID-19 vaccination have been published in medical literature. Some of them were fatal.  A 27-year-old athletic man was transferred to the emergency room due to cardiopulmonary arrest 8 days after  the first dose of the mRNA-1273 SARS-CoV-2 vaccine (Moderna, Cambridge, MA, USA). His  teammates called for an ambulance   when he was found sitting unconscious during practice. A chest radiograph obtained in an emergency room showed an enlarged heart and  pulmonary congestion (Panel  E). The patient had undergone orthopedic surgery 3 months before the recent hospitalization. An electrocardiogram (ECG)  abnormality and mild cardiac shadow enlargement in chest radiograph had been also noted preoperatively ( Panels  B, D); however, since he was asymptomatic, no further examination was performed. E ndomyocardial biopsy performed before death showed no evidence of myocarditis; therefore, cardiopulmonary arrest due to arrhythmic mitral valve prolap
Post a Comment
Read more 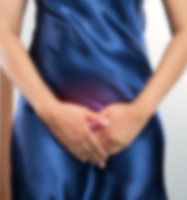 Multiple cases of  COVID-19  vaccine-triggered vulvar ulcers have been reported in medical literature.  A  12-year-old healthy girl  without prior sexual activity nor history of oral or genital ulcers presented with a 1-day history of vulvar ulcers with associated swelling and pain three days after receiving the second dose of the Pfizer COVID-19 vaccine.  Her condition resolved within 10 days after treatment.  A 12-year-old otherwise-healthy female patient presented with painful vulvar ulcerations that had been present for approximately 5 days, starting from 2 days after her 2nd Pfizer vaccine.  Ulcers healed over the course of 2 weeks after treatment.  A virginal 14-year-old girl reported vulvar pain and visible lesion. Exam findings were consistent with vulvar aphthous ulcers. Two days prior to the onset of her symptoms she received her second Pfizer-BioNTech COVID-19 vaccine. The evening of vaccine administration, she experienced several hours  of fatigue, muscle aching and inso
Post a Comment
Read more 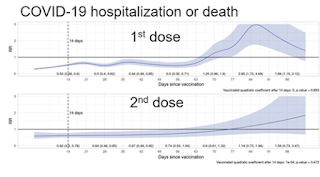 Several studies reported that COVID-19 vaccine effectiveness (VE) and relative vaccine effectiveness (rVE) against severe COVID-19 outcomes can turn negative after a few months.   One  recently published paper (data analyzed were from 8 December 2020 to 30 June 2021) concludes that For Doses 1 and 2 of ChAdOx1 and Dose 1 of BNT162b2, VE/rVE reached zero by approximately Days 60–80 and then went negative. By Day 70, VE/rVE was –25% (95% CI: –80 to 14) and 10% (95% CI: –32 to 39) for Doses 1 and 2 of ChAdOx1 (see Figure). The same trend was observed for BNT162b2 although it seemed to provide a better protection. Another not-yet published paper found that vaccine effectiveness was waning for all studied doses, including the 4th booster that worked for 90 days. Among health-care workers who had not had previous SARS-CoV-2 infection , time-specific vaccine effectiveness decreased from 52% (95% CI, 45 to 58) during the first 5 weeks after vaccination to −2% (95% CI, −27 to 17) at 15 to 26
Post a Comment
Read more

Exacerbation of COPD after a COVID 19-Booster Vaccine

A 75-year-old African American woman presented to the Emergency Department (ED) complaining of shortness of breath, cough and a drop in her oxygen saturation (SpO2) from her baseline of 95%–88%.  She received a Pfizer COVID 19 booster vaccine one day before her symptoms began. The patient had received the Johnson & Johnson COVID-19 vaccine 11 months prior without a notable reaction.    She had a history of  chronic obstructive pulmonary disease (COPD)  but was  not on any home oxygen.  Upon admission the patient had an SpO2 of 82% and a heart rate of 101 beats per minute. Notably, she was afebrile, with a temperature of 36.6 °C. On physical exam the patient was noted to be wheezing and breathing with difficulty. She t ested negative for a variety of respiratory viruses including COVID-19.  A chest radiograph (x-ray) demonstrated subtle patchy opacifications consistent  with a COPD exacerbation, and no consolidations or pleural effusions. A normal cardiac silhouette was also observ
Post a Comment
Read more

Decreased Case Fatality Rate (CRD) in the Omicron era  was largely a result of the decreased pathogenicity of Omicron .  In one study of 101 470 patients , mortality rates were 0.7% for Delta (B.1.617.2), 0.4% for Omicron (B.1.1.529), and 0.3% for Omicron (BA.2) subvariants. Yet,  people keep dying from COVID even in the BA.5/BA4.6 variants era, since the severity of symptoms is affected by age and other health conditions.  One of the most recent October 2022 COVID-19 fatalities was a 62-year-old veteran competitive bodybuilder . He completed his primary vaccination series in April 2021. A 67-year old theoretical physicist  died on October 19th from complications of COVID-19 he had in September. A 63-year-old person with Navajo ancestry died after her 10-month battle with the original strain of Omicron.  By May 2022, more vaccinated individuals  aged 90 or more  died from COVID-19 than unvaccinated elderly of the same age. By mid-October 2022, cumulative incidence of breakthrough deat
Post a Comment
Read more

An 86-year-old male was transported to the Emergency Department of a hospital after a syncopal episode associated with abdominal pain and diarrhea. He had multiple comorbidities ( ischemic heart disease, diabetes, hypertension ) and received two doses of BNT162b2 (Pfizer-BioNTech) mRNA vaccination (the last dose seven months before admission) and was fully vaccinated since the 3rd dose was not yet recommended.  Laboratory tests at admission showed modest increase in C reactive protein  and creatinine.  CT documented two faint areas of ground glass opacity (GGO) in the left lower lobe and oropharyngeal swab tested positive for SARS-CoV-2 infection.  Despite the appropriate treatment, the clinical condition of the patient did not improve, leading to his death about three weeks after the hospital admission. Post-mortem CT (PMCT)  also known as virtual autopsy is a non-invasive imaging autopsy appropriate for COVID-19 cases  due to biohazard challenges. PMCT  showed scant non-dependent on
Post a Comment
Read more

Systemic adverse reactions after the 5th dose of COVID-19 vaccine 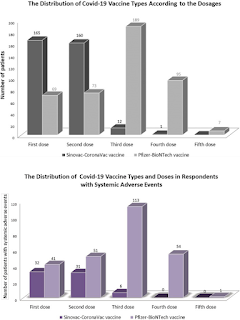 As fewer and fewer people opt for additional boosters of COVID-19 vaccine, are those who never had vaccine adverse events experiencing new side effects? VAERS reports many uneventful vaccinations even with extra doses given too soon after previous ones. Yet there are cases such as  abdominal pain , or Addisonian crisis  after the 5th dose. One case of systemic adverse reactions (14%, out of 7 respondents) was self-reported after the 5th booster in a survey-based study . The study also showed higher incidence of cutaneous reactions after 3rd vs 2nd dose of the same vaccine.  89 out of  234  vaccinated individuals  (38%)   who filled out  a web-based survey in Turkey  reported  at least one cutaneous adverse event related to the vaccination.  The responders cumulatively received 771 doses.  The mean number of vaccine dosages was 3.29 ± 0.76 (minimum:1, maximum:5). Sixty‐six (28.2%) cases had at least one accompanying systemic disease. Additionally, 74 (31.6%) had been diagnosed with one
Post a Comment
Read more

Rapid Progression of Prediabetes to Diabetes after Booster Dose

A 69-year-old male with a past medical history of hypertension and prediabetes presented with worsening fatigue, polyuria, polydipsia, blurry vision, and 14 pounds of weight loss over three weeks that started soon after receiving the 3rd booster dose of BNT162b2 mRNA vaccine. He also reported intermittent upper abdominal pain and episodic ambulatory lightheadedness for two weeks. He also reported a loss of taste and smell for two weeks with a diminished appetite. His family history was significant for some members with Graves' disease and celiac disease. He was a non-smoker with no alcohol or illicit drug use. On examination, he was afebrile with normal blood pressure, sinus tachycardia, and mild tachypnea. Physical exam was remarkable for mild upper abdominal tenderness and dry oral mucosa.  Complete blood count (CBC) was normal; blood glucose was severely elevated with mild corrected hyponatremia; elevated anion gap metabolic acidosis with glucosuria and ketonuria. He received a
Post a Comment
Read more

A 60-year-old African American female with previously stable bipolar I disorder (BD1) presented after three weeks of depressed mood, anxiety, and decreased need for sleep.  P atient Health Questionnaire-9 (PHQ-9) - a  widely used tool for diagnosing depression was administered and her  score was 5. Her symptoms began within a week of receiving the second dose of the Pfizer-BioNTech COVID-19 vaccine. She  was assessed  a PHQ-9 score of 0  17 days before vaccination.  Her prescription of risperidone 2mg was temporarily increased to 3mg, and her symptoms returned to baseline after two weeks.   A 4 0-year-old white male  with previously stable BD1 and attention deficit hyperactivity disorder (ADHD) was voluntarily hospitalized due to a mixed episode with psychotic features.  His symptoms began after receiving the second dose of the Moderna COVID-19 vaccine and subsequently worsened after he discontinued his medications five days prior to admission. His symptoms stabilized after 10 days of
Post a Comment
Read more 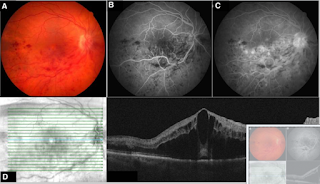 A 13-year-old boy presented to the hospital with a complaint of painless diminution of vision in the left eye for 2 weeks. It started 15 days after taking the first dose of Corbevax COVID-19 vaccine. Corbevax, also known as BACOV2A, is a  recombinant protein subunit vaccine  approved for emergency use in India  o n 28 December 2021. Fundus fluorescein angiography of the left eye showed a delay in venous filling in the early phase of angiogram and blocked fluorescence corresponding to the areas of hemorrhages revealed by fundus examination.  The patient was administered three doses of pulse corticosteroids followed by a tapering dose of oral corticosteroids. A t 6 weeks follow-up, fundus revealed complete resolution of the retinal hemorrhages and disk edema. A 44-year-old otherwise healthy male   presented with sudden painless vision loss in his left eye 10 days after receiving i nactivated vaccine Covaxin/BBV152 . Fundus examination revealed arterial attenuation and macular cherry re
Post a Comment
Read more
More posts