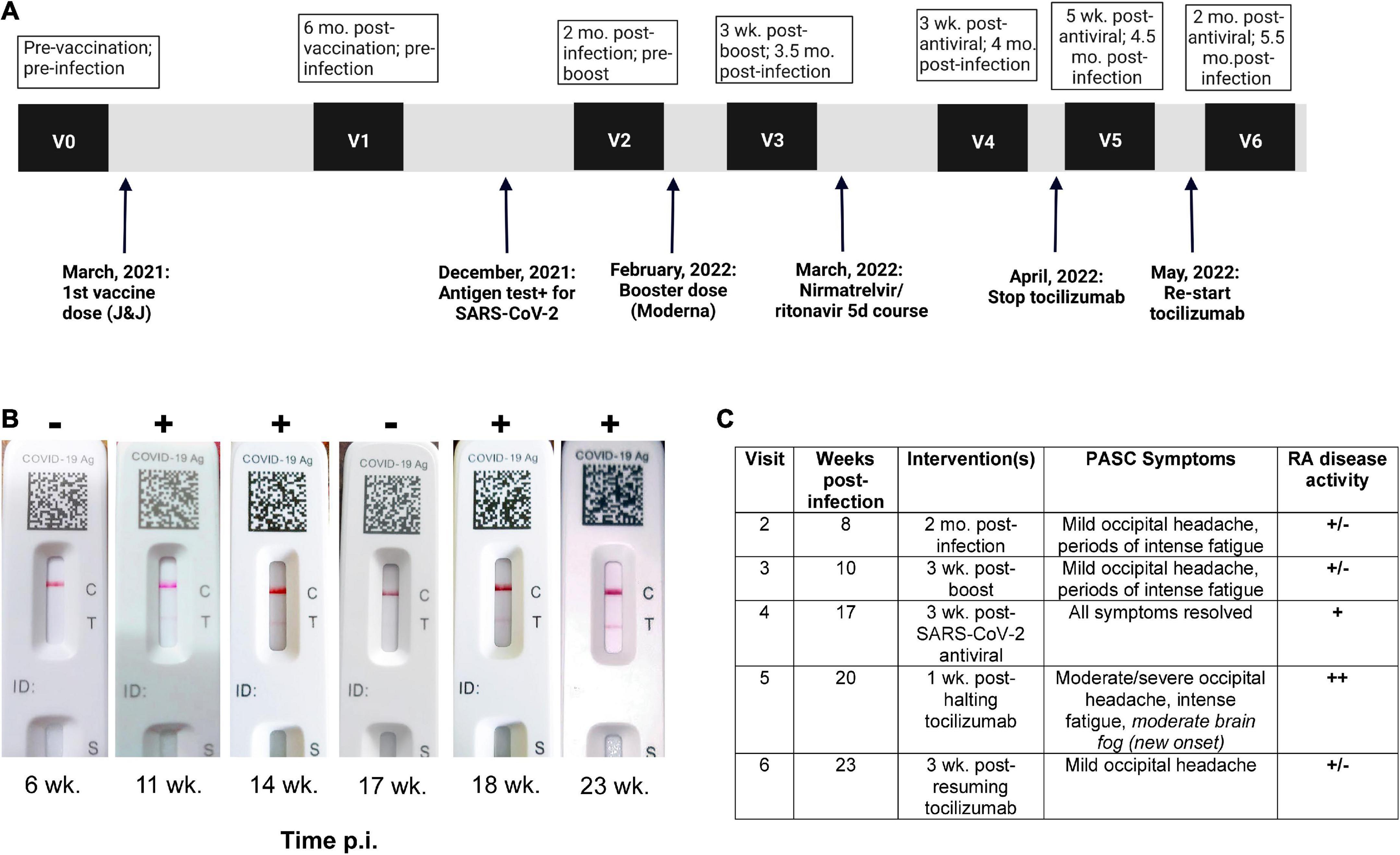 A 37-year-old South Asian woman with a 7-year history of rheumatoid arthritis (on bi-weekly tocilizumab injections) tested SARS-CoV-2 positive 9 month after receiving her vaccination (JNJ-78436735). She experienced persistent headache and fatigue for >6 weeks after infection and continued to test intermittently antigen+ for 14 weeks post-infection despite no overt exposure to SARS-CoV-2 infected individuals. She lived alone, did not leave her residence without a surgical-grade N95 mask, and never removed the mask in public. She was subsequently prescribed a 5-day course of nirmeltravir/ritonavir 300/100 mg twice daily. Initially, all PASC symptoms resolved, and the patient tested antigen negative 3 weeks after completion of nirmeltravir/ritonavir, but the symptoms and antigen positivity subsequently reappeared at 4 weeks (see figure). Assessment of adaptive immune responses demonstrated that nirmatrelvir/ritonavir and tocilizumab treatment decreased antiviral and autoreactive T cell activation. The patient halted tocilizumab therapy for RA upon her rheumatologist’s recommendation for 10 days in an attempt to fully clear the virus, during which time she developed more severe post-acute sequelae of COVID-19 (PASC) symptoms and the appearance of new-onset cognitive impairment (brain fog). She resumed tocilizumab and within 3 weeks her fatigue and brain fog had resolved while the occipital headache decreased in severity (Panel C in the Figure above).   However nasopharyngeal antigen positivity remained.

The patient’s mild acute symptoms combined with an escalation in Neuro-PASC symptom severity after stopping tocilizumab, as well as their resolution after resuming treatment suggests that IL-6 blockade should be studied further as a potential therapeutic intervention for Neuro-PASC.

Visvabharathy L, Orban ZS, Koralnik I. Case Report: Treatment of long COVID with a SARS-CoV-2 antiviral and IL-6 blockade in a patient with rheumatoid arthritis and SARS-CoV-2 antigen persistence. Frontiers in Medicine.:2832.